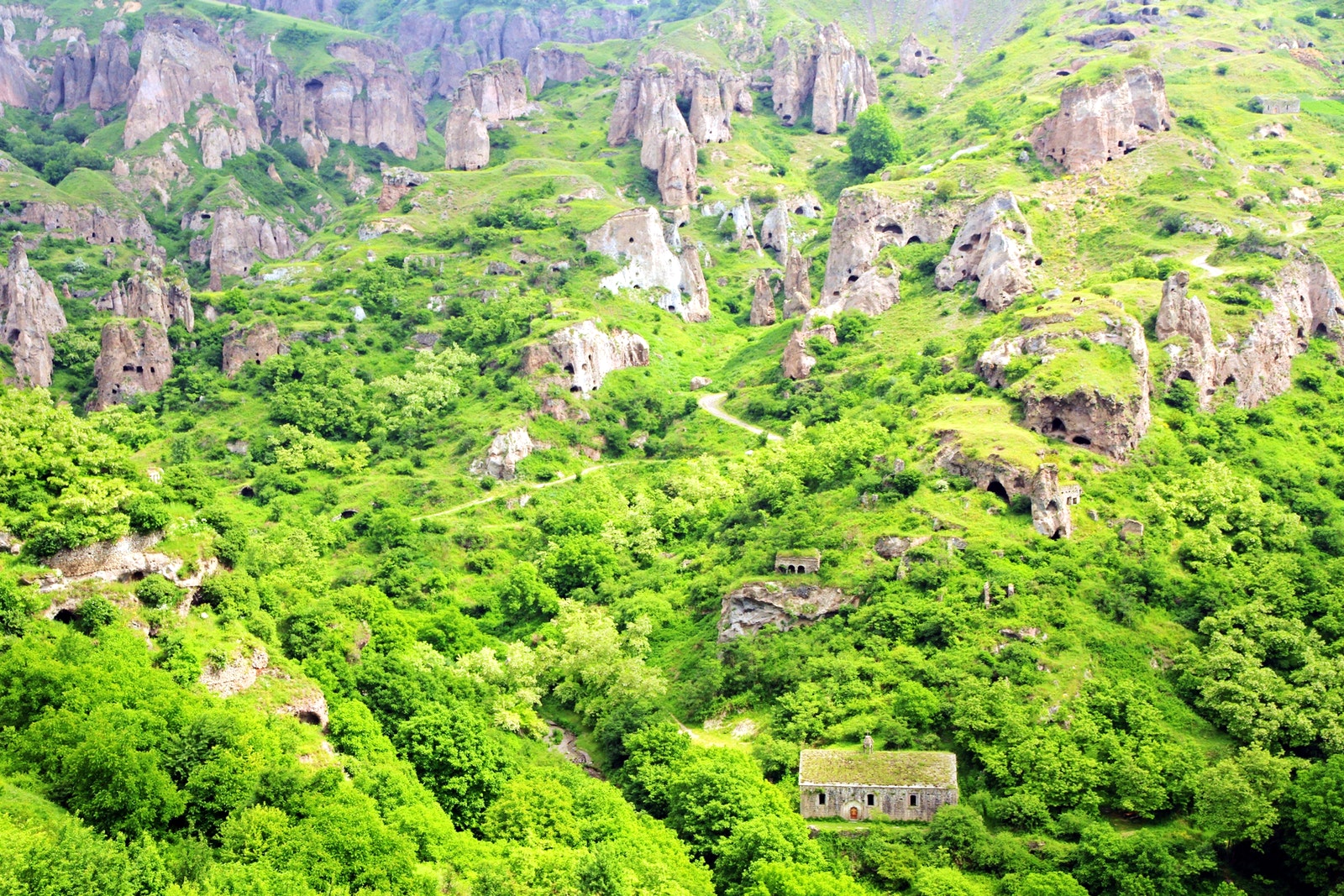 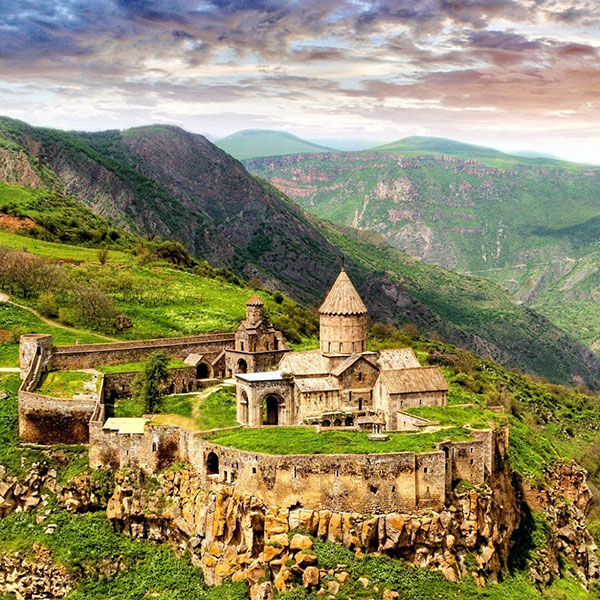 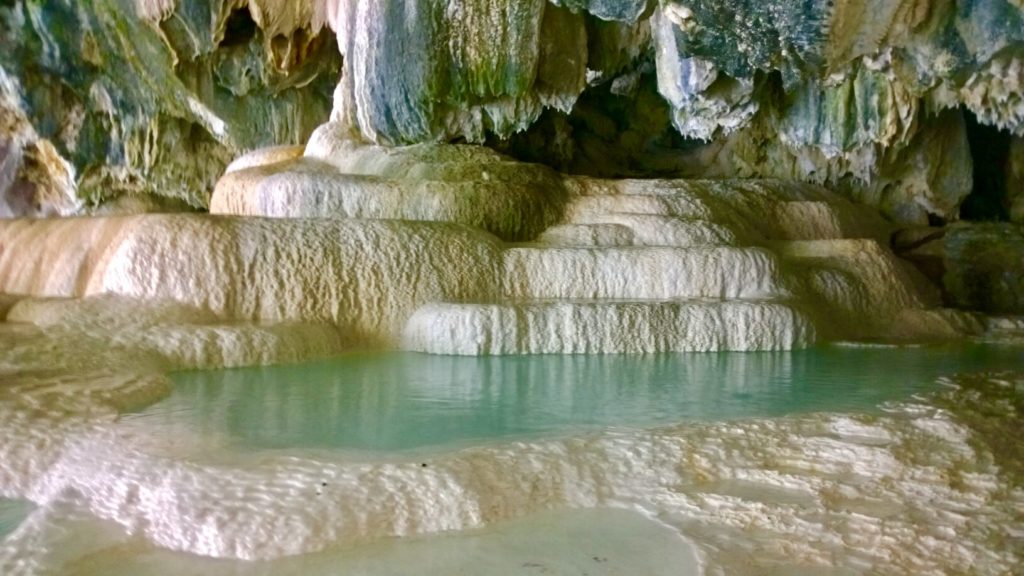 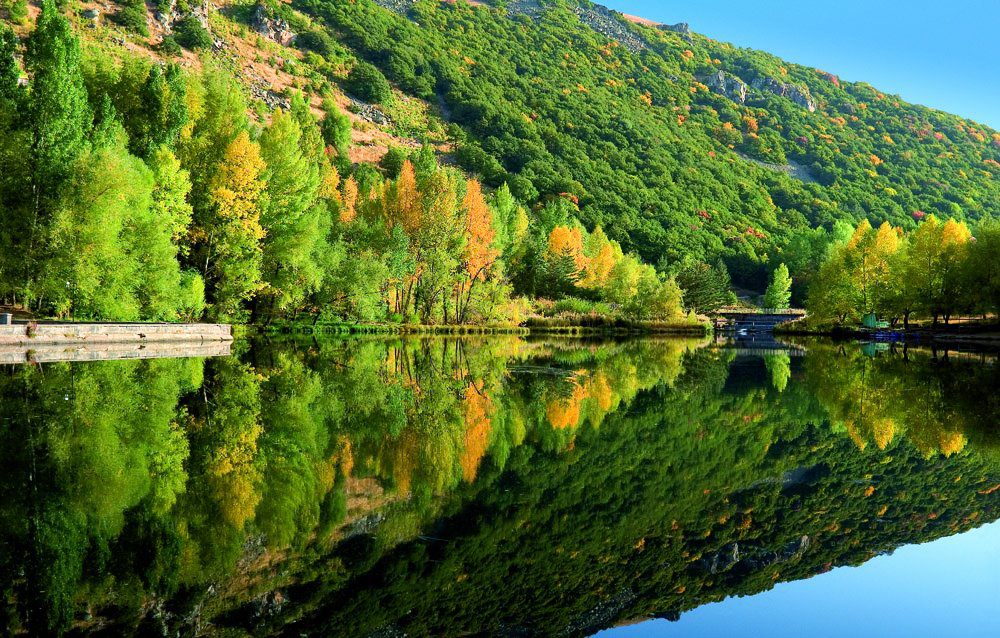 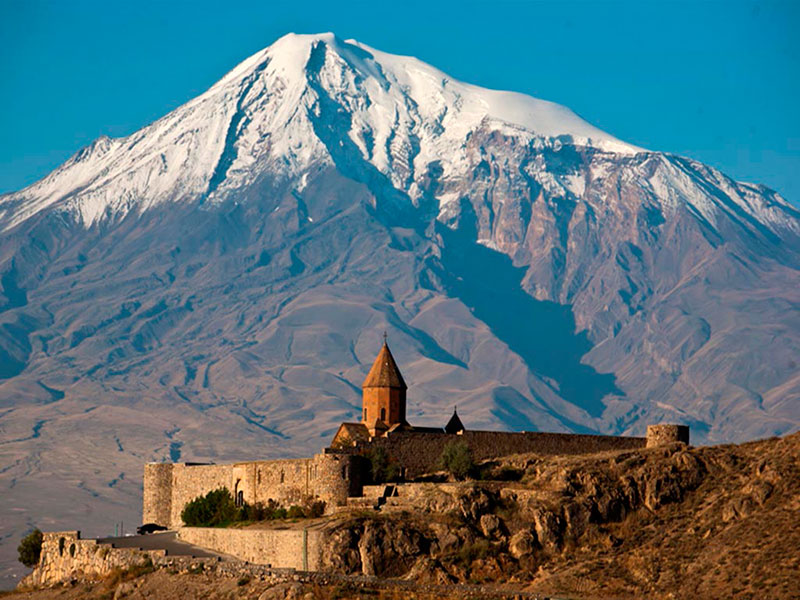 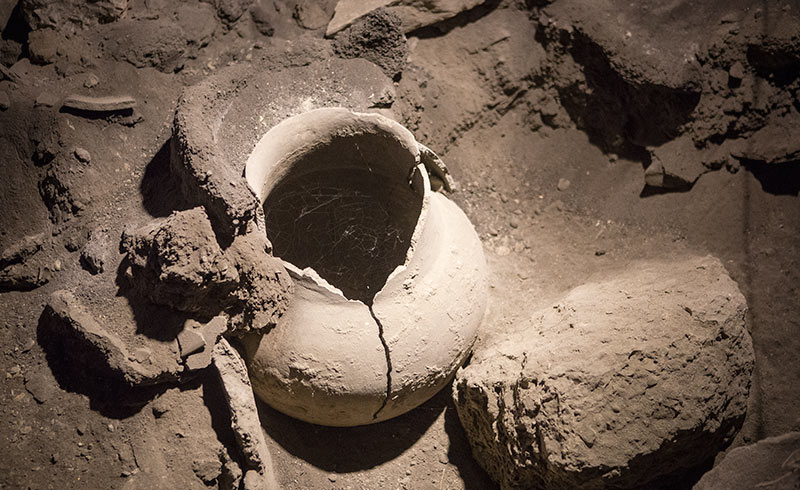 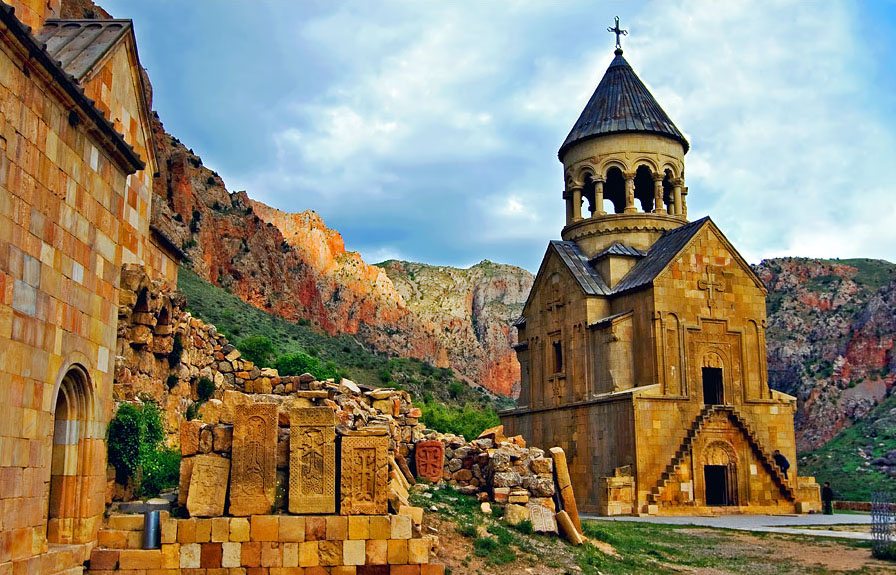 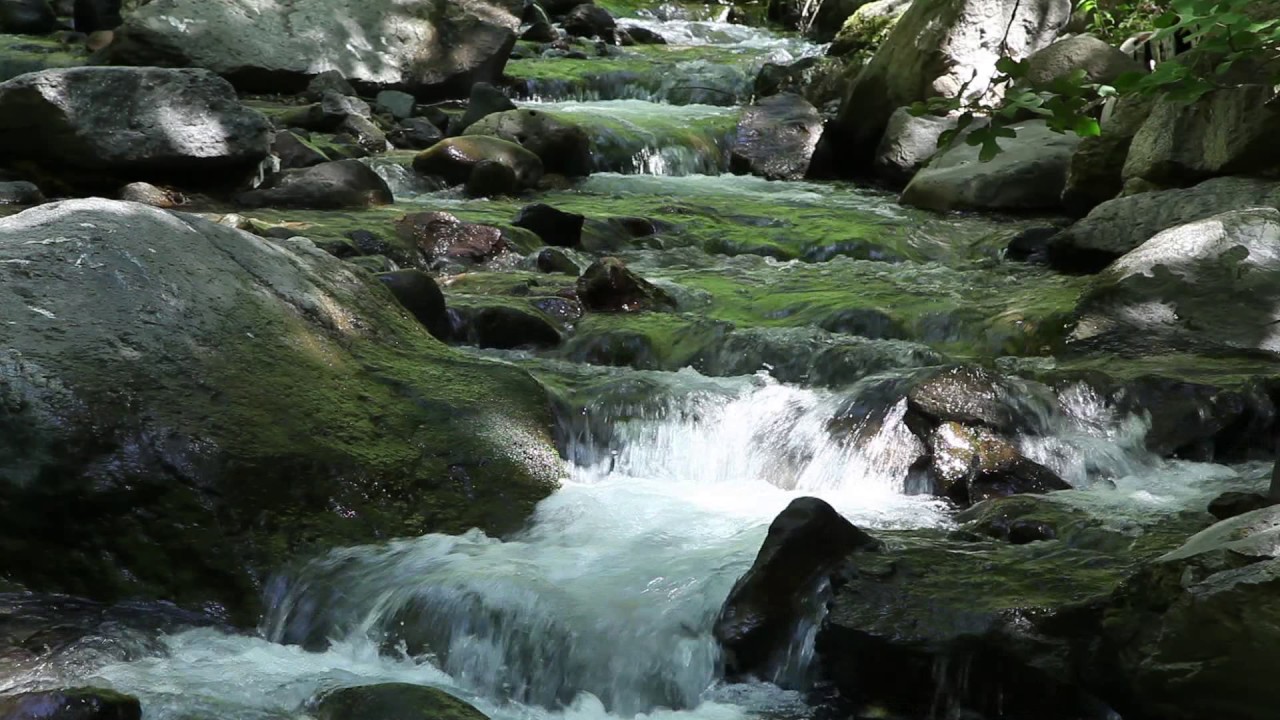 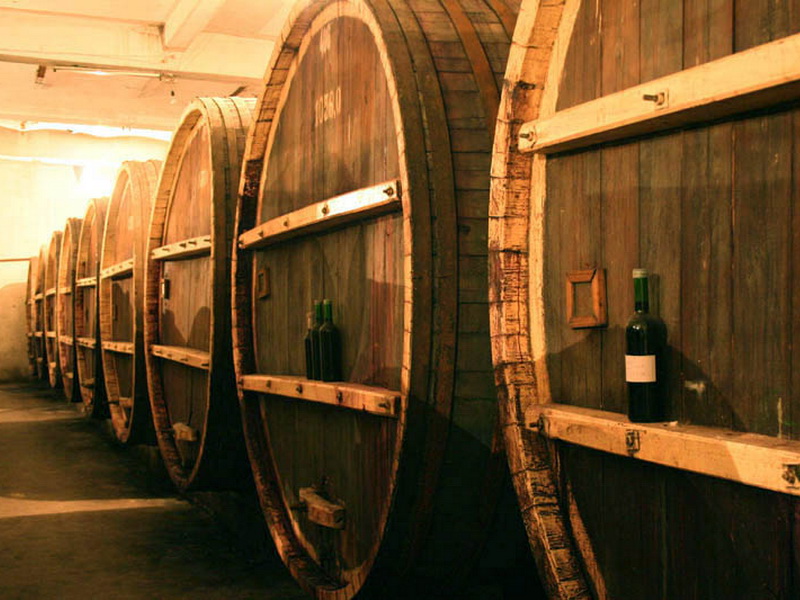 Khndzoresk is a village in the South-East of Armenia, in the province of Syunik. The village is located to the right of Goris - Stepanakert highway, on the steep slopes of Khor Dzor (Deep Gorge), from which, according to tradition, it got its name. Khndzoresk is widely famous for its canyon with picturesque rock formations and ancient cave settlement. The artificial caves, some of which are currently used as stables and warehouses, used to be inhabited till the 1950s. In the bottom of the gorge there is St.Hripsime church, dated back to 17th century. On a spur beyond on the right side of the gorge there is Anapat (hermitage) with the tomb of Mkhitar Sparapet. The cave church of St.Tatevos can also be found nearby.

The Tatev Monastery is a 9th-century Armenian Apostolic located in South-East Armenia, in the area of ancient Armenian Syunik, not far from the city of Goris and 280 km away from Yerevan. The fortified Tatev monastery consists of three churches; Sts. Paul and Peter, St. Gregory the Illuminator and St. Mary, a library, dining hall, belfry, mausoleum as well as other administrative and auxiliary buildings. The monastery is the "best-known site" in Syunik. Wings of Tatev, a cableway from Tatev to Halidzor village was opened in October 2010.It was included in the Guinness World Records as worlds "longest non-stop double track cable car."

Located below Tatev Monastery, in the 500-meter gorge of the Vorotan River, is one of Armenias natural wonders – “Devils Bridge”. Over the millennia, wind and water have created this wonder of nature, polishing and piercing the petrified lava. The width of this natural bridge, along which runs the auto road to Tatev Monastery, is 60 m, the length 30 m. Close to the bridge it is possible to swim in the warm, salubrious springs, ringed by stalactites of marvelous colors. The most intrepid can descend to the river to see the secretive grottos below the springs.

Jermuk is a mountain spa town in Vayots Dzor Province at the south of Armenia. Jermuk is famous for its hot springs and mineral water brands bottled in the town. It is attractive for its fresh air, waterfall, artificial lakes, mineral water pools, the surrounding forests and walking trails. The town is being redeveloped to become a modern center of tourism and health services. It is also being set up to become a major chess centre, with numerous chess international tournaments scheduled in the town. The name of the town is derived from the Armenian word of "jermuk", in Western Armenian"chermoug" meaning "warm mineral spring", first mentioned during the 13th century by historian Stepanos Orbelian in his work History of the Sisakan Province.

The Khor Virap is an Armenian monastery located in the Ararat plain in Armenia, near the closed border with Turkey, about 8 kilometres south of Artashat, Ararat Province, within the territory of ancient Artaxata. The monastery was host to a theological seminary and was the residence of Armenian Catholicos. Kour Virap is the best place to look at the Biblical Ararat

Suriki Lich is a wonderful place for people who like to enjoy nature. Quit place lovers can stay here in camping tents . You will be amazed by the beauty of this mysterious place.

The explorer’s name of this place is Surik and lich means lake, that is why this spot is called Suriki Lich. Here you can see the waterfall called Syune (it’s the name of the explorer’s daughter).